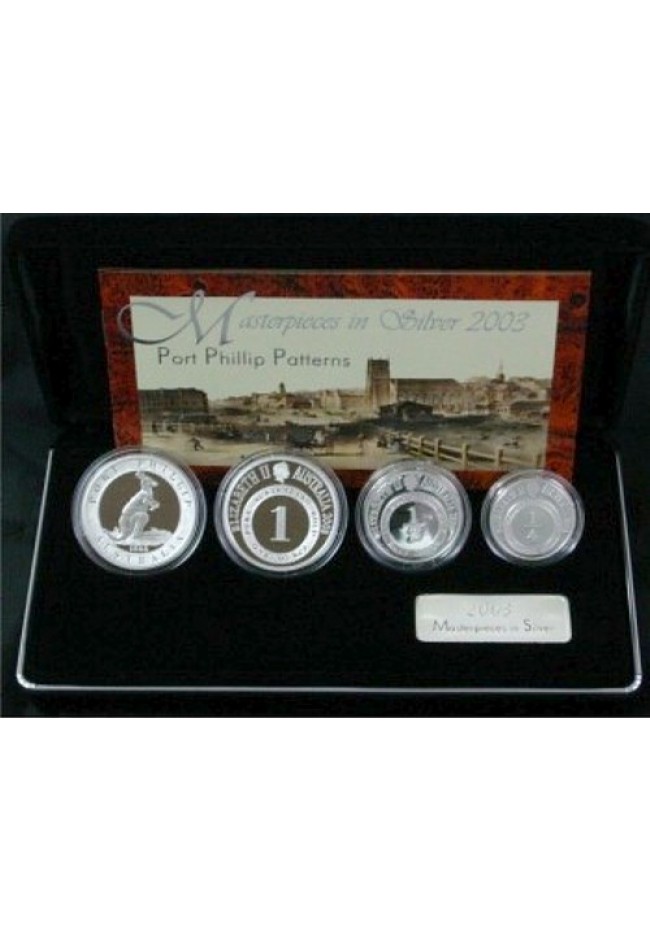 Limited edition of 10,000 with actual mintage of only 7,489. Complete in case with certificate of authenticity and outer shipper

The 2003 Masterpieces in Silver celebrates the 150th Anniversary of the establishment of the Port Philip Kangaroo Office.– The Port Phillip Patterns, also known as the Taylor Patterns..The numismatic story behind this issue only serves to further illustrate the beauty and appeal of these Masterpieces. Struck in fine silver to a proof finish, this four coin set represents an excellent addition to any collection.

The mystery behind Australia’s Port Phillip Kangaroo Patterns is a fascinating but little known numismatic story. Essentially a failed business venture, it represents one of the firstst attempts to establish a coin producing industry in Australia, and has left in its wake many enigmas. Where in Melbourne was the ‘Kangaroo Office’, the venture that produced these patterns, originally housed? How many patterns were really produced, a figure we still do not know today, and why were the instructions to drop the dies into the depths of Port Phillip Bay not carried out? The dies resurfaced in 1917, during stocktaking by the later owners of the ‘Kangaroo Office’ coining press, Thomas Stokes.